1996 bi-metallic $5 Sir Donald Bradman coin in credit card sized information folder. Coin has a steel ring with an Aluminium Bronze centre. It carries the Maklouf portrait of Queen Elizabeth II on the obverse and a depiction of ‘The Don’ batting on the reverse. Coin is in uncirculated condition.

Sir Donald Bradman debuted for New South Wales in the 1927-28 season at just 19. He amassed a career total of 28,067 runs, including 117 hundreds. This Test batting average of 99.94 established over a test career of 20 years and 52 tests, stand not only as a record unlikley to be surpassed but as a testimony to his pre-eminent standing in the game of cricket.

Note the image is a stock image of one of the folders in stock, we have multiples available. 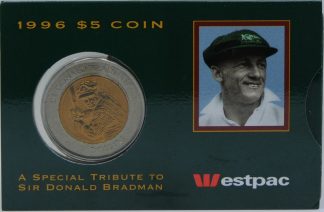